Former Barcelona striker Luis Suarez heaped more misery on his old club as Atletico Madrid claimed a 2-0 La Liga victory over the Catalans at the Wanda Metropolitano on Saturday.

First-half strikes from Thomas Lemar and Suarez were enough for the champions to secure all three points and heap pressure on the visitors’ beleaguered boss Ronald Koeman.

Barca have won just one game in their last six in all competitions as their early-season struggles show no signs of easing.

Atletico started the brighter and went close through Lemar and Joao Felix efforts from the edge of the box before the Frenchman opened the scoring in the 23rd minute.

Felix fed Suarez, who played a brilliant ball round the corner to send Lemar through and he powered his effort past Marc-Andre ter Stegen.

Suarez then missed a glorious chance to double the lead moments later as he skewed a one-on-one effort wide, but made no mistake on the stroke of halftime after Lemar returned the favour to tee him up.

Barca’s best opportunity to get back into the game fell to Philippe Coutinho, however the Brazilian’s tame effort was comfortable saved by Jan Oblak.

Borussia Dortmund twice hit the woodwork and wasted several more chances before squeezing past Augsburg 2-1 in the Bundesliga on Saturday to climb to second place.

The Ruhr valley club bounced back from last week’s loss to Borussia Monchengladbach and extended their winning run at home to eight consecutive league games to move into second place, within a point of leaders Bayern Munich, who are in action on Sunday against Eintracht Frankfurt. 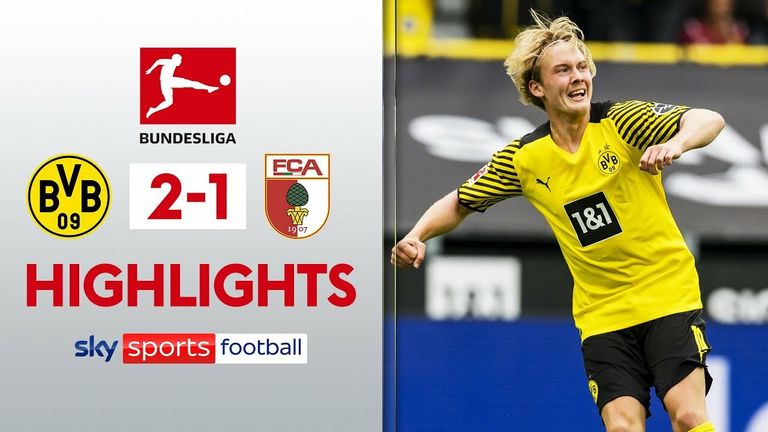 Highlights of the Bundesliga game between Borussia Dortmund and FC Augsburg.

Julian Brandt bagged a second-half winner after Dortmund’s Raphael Guerreiro had put them in front with a 10th-minute penalty with 41,000 fans allowed in the stadium, the largest number since the outbreak of the COVID-19 pandemic in 2020.

The hosts were far from impressive for more than an hour but the game unravelled for gutsy Bochum midway through the second half and just seconds after substitute Silva came on.

The Portuguese proceeded to score his first goal from open play since his big-money move from Eintracht Frankfurt this season, heading in from close rage in the 70th minute to break the deadlock.

He then sent Christopher Nkunku through, who flicked the ball in for their second goal of the evening four minutes later.

The in-form Frenchman then sealed victory when he scooped the ball over the keeper and into the net in the 78th to double his tally and make it nine goals in 10 games in all competitions this season.

The win, Leipzig’s second in a row, lifted them up to seventh place on 10 points.

Manuel Locatelli struck late to earn Juventus a 1-0 win over Torino in the Turin derby on Saturday, as the Old Lady stretched their winning run to four games in all competitions and kept a Serie A clean sheet for the first time in seven months.

The Italy international fired a shot in off the post with four minutes remaining, his second consecutive league goal, as Juve rose to eighth place with 11 points, three ahead of their 11th-placed rivals.

Locatelli found space at the edge of the area to fire home the winner in the 86th minute, before substitute Dejan Kulusevski thumped the foot of the post with a shot in stoppage time.

Inter Milan substitute Edin Dzeko equalised a minute after coming on before winning the decisive penalty as the Italian champions earned a 2-1 comeback win over Sassuolo to go second in Serie A.

Domenico Berardis penalty put the hosts in front midway through the first half, but Dzeko made an immediate impact by heading in the leveller with his first touch in the 58th minute.

The Bosnian, who became the joint-top scorer in Serie A alongside Lazios Ciro Immobile with six goals, was then brought down by goalkeeper Andrea Consigli in the box and Lautaro Martinez dispatched the resulting spot kick.

Earlier on Saturday, Salernitana climbed off the foot of the table after Milan Djuric’s header sealed a 1-0 win over Genoa, their first victory of the season. The newly promoted sides victory moved them up to four points, one behind Genoa in 16th and one more than bottom side Cagliari.