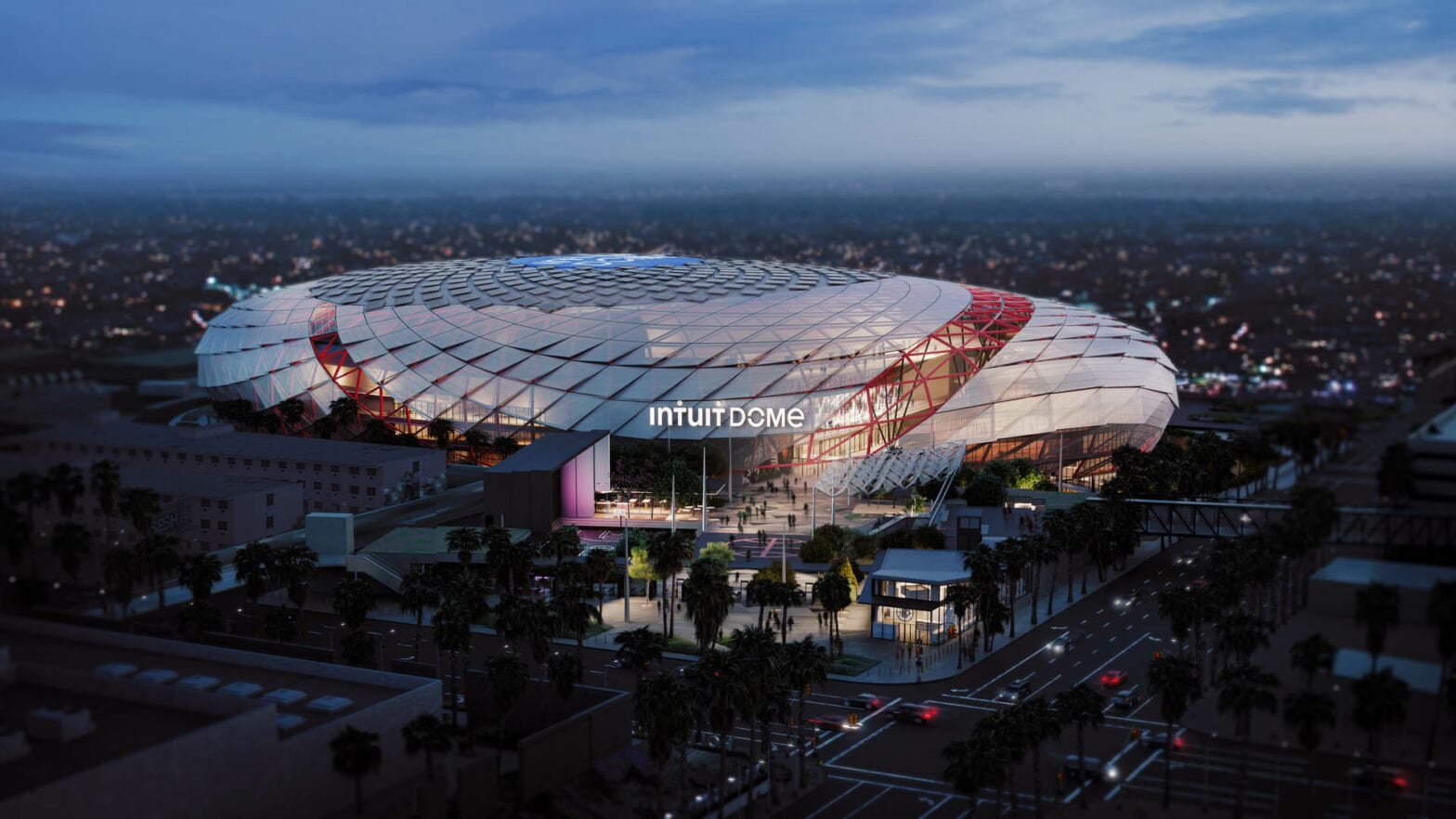 The Clippers will play in the Intuit Dome in 2024 when it opens (photo via Intuit Dome).

INGLEWOOD, Calif. — The design meetings have been going on for years. Technology has evolved throughout the process. Painstaking decisions were made time and time again, right down to what an inch or two difference in leg room between rows would mean or where cupholders should be affixed to the seats.

Finally, Steve Ballmer and the LA Clippers are ready to build their new home.

The Clippers’ long-awaited, $1.8 billion, privately funded arena officially got a name Friday — Intuit Dome, it’ll be called when it opens in 2024, the team making that announcement on the day of the formal groundbreaking ceremony. The practice facility, team offices for both business and basketball operations, retail space and more will all be on the site.

Ballmer, the team’s owner, simply believes it’ll be like no other building in the NBA.

“Basketball mecca! Basketball palazzo!” Ballmer, in his usual excitable way, said in an interview with The Associated Press.

Every detail — from the huge halo video screen that will hover over the court, to how the bathrooms will be designed to get fans back in their seats as quickly as possible — has a purpose. The halo will include 44,000 square feet of LED lighting, slightly more than one full acre and roughly six times the average size of other “big” screens in NBA buildings. The roof of the dome was designed to accommodate the halo, not the other way around.

Things the Clippers have seen in play at German soccer stadiums, other NBA buildings, NFL stadiums, even the Amazon Go checkout-free convenience stores all sparked various ideas that will be put into play at Intuit Dome.

“I had a lot of my own opinions … and most of the things had some inspiration that came from someplace else,” Ballmer said.

The Clippers currently play at Staples Center, also the home of the Los Angeles Lakers and the NHL’s Los Angeles Kings. Ballmer began plotting a Clippers-only home years ago and formally unveiled the project in 2019, saying then that the Clippers would break ground in 2021 and open in 2024.

So far, even with a pandemic and following some legal challenges, he’s right on schedule.

Technology will be everywhere, such as some that would allow fans to leave their seat, walk to a concession stand in the concourse, grab a beverage or snack and then — if they do as Ballmer hopes — get right back to their seat. There would be no cashier, nobody to take the order, and the customer’s account would be charged automatically. Other than the paying-for-it part, it would be akin to opening the refrigerator at home, getting a drink and going back to the couch.

Even the best suites won’t have big televisions. The reason is simple: Ballmer wants fans watching the game from their seat and being part of a home-court advantage.

Join us at 10AM PT for the @Intuit Dome groundbreaking ceremony LIVE on YouTube » https://t.co/ZuVLSZ8tJ0 pic.twitter.com/ZC546rb17g

“It’s about the game of basketball … and we’re trying to get you back in your seat as quickly as we can,” Ballmer said.

He wants them comfortable in those seats, too. The leg room — which will be a constant throughout the arena, from the lowest rows all the way to the very top — is going to far exceed the standard in most buildings.

“We treated like the upper bowl like the lower bowl,” Ballmer said. “Nobody gets a bad seat, no matter where you sit in the building.”

His favorite feature: It’ll be known as The Wall.

Beyond the end of the court where Clippers’ opponents will have their bench will be 51 uninterrupted rows of seats, room for about 4,700 fans, with a standing-room-only section in the middle of it all. There’s no upper or lower deck there, just row after row after row of what Ballmer hopes is a bunch of fans that, well, act like he does during games.

Again, it was designed with a purpose. Acoustics experts were brought in to ensure that The Wall generates as much sound as possible.

Put simply, one of the league’s best-known fans, and one of the world’s wealthiest men — the former Microsoft CEO is generally believed to be worth around $100 billion — may be building the coolest possible basketball hangout for himself and 18,000 of his closest friends.